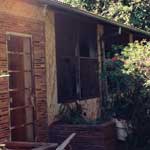 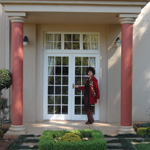 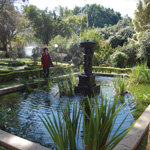 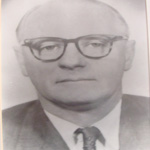 The exquisitely restored Joubert House, is one of the historical buildings of Tzaneen. It was constructed in 1927 by Danie Joubert  for his wife, Maria. Currently housing Casa Mia Interiors, and Ashley's Coffee House, this beautiful property is now a thriving commercial location.

Joubert House was the first ever home in Tzaneen to have had a swimming pool. This unique aspect of the property has now been beautifully converted into a pond.

Joubert House was bought in 1995 by the current owners, Rita and Callie Landauer, from Joubert’s widow, and restored to perfection.  Danie Joubert, was by profession an attorney, and one of the founding fathers of Joubert & May Attorneys. Joubert was renowned as a brilliant criminal law and water rights attorney, and elected town mayor twice, from 1936 – 1940 and again from 1949 - 1950.

During a fishing holiday in Mozambique the boat Danie Joubert and his friend Jack Duffus was in, capsized and they drowned. These tragic deaths in 1959 came as a great shock to Tzaneeners.

The Tzaneen community's affinity and love of this legendary man, Danie Joubert, was evident at their joint funeral on 17 July 1959, when the NG Church Tzaneen was so full, mourners crammed into the church and even sat on the floor and on the church steps outside to pay their last respect, making it one of the biggest funerals ever held in Tzaneen.

Danie Joubert had a lasting impact on this beautiful town, a man loved and respected by many, it is no wonder then, than in honour of this legend, the main street of Tzaneen was renamed from Yamorna Street, to Danie Joubert Street.

Visit Joubert House on the corner of Agatha & Hermanus Street in Tzaneen and have some tea in the garden of one of the true founding fathers of this tropical paradise.