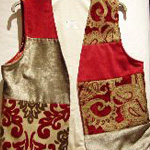 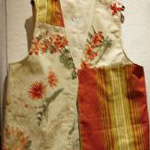 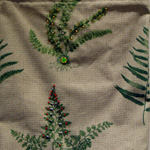 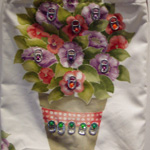 TIN CAN CHARITY is based in the beautiful town of Tzaneen, in the Limpopo Province of South Africa. It grew from ideas around recycle, re-use, renew. Keeping a watchful eye on anything and everything that is discarded by people, many bits and pieces to be used and applied are collected to make useful articles, or a piece of clothing So, after playing around with some of the bags full of can pulls, the first tote bag, cleverly decorated with can pulls and other extras, was sewn up.

Re-cycled off cuts are used to make the bags. With off cuts pouring in, another idea came to fruition – waistcoats from waste materials!

ORGANISATIONS WHO HAVE BENEFITED FROM THE PROCEEDS ARE
•         Tzaneen Care Group, acting for CANSA,
•         CANSA Nelspruit,
•         as well as the Keurboom Interim House in Johannesburg, Gauteng

Seeing that we started in the middle of winter 2011, we set ourselves a modest target of 1000 squares by 31 December 2011. Aptly, we formed a 1000 SQUARES CLUB, and envisage to double the amount of squares each year, taking it step by step.

Our goal is to knit or crochet squares to be sewn together as blankets, pullovers, vests and hats and other warm clothing for less fortunate children and adults to alleviate their distress. Beneficiaries include destitute,impoverished, homeless, abused and socially disrupted people.

Any individual, organisation, school, business, church groups, clubs, old age homes, care organisations can participate on a voluntary basis. Knitting and sewing is carried out throughout the year to prepare for the following winter.