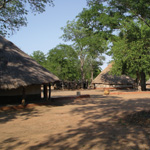 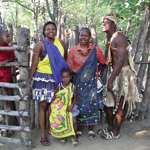 Compared with common western family structures, the traditional social structures of the Tsonga tribes are quite complex. The smallest social unit we can determine is the ‘nuclear family’, consisting of a woman with her own hut and cooking area, her husband and their children. For Tsonga men, the possibility of having more than one wife exists. In the case of polygamical relationships, so called ‘extended families’ arise, consisting of a group of nuclear families, headed by the same man.

When the sons of an extended family are marrying, a settlement, or muti arises, consisting of a man, his wives, their unmarried children and the families of their married sons. Traditionally, these settlements appeared as circular living areas, surrounded by wooden walls. Inside this circle, various huts and cooking spots were build. Besides these settlements, we can determine ‘related settlements’, based on remaining family relations.

Within the Tsonga community, different social units exist. Besides the family-units mentioned above, lineages or nyimba can be found, consisting of persons who can prove they descend from the same ancestors. The various lineages can be grouped into clans or xivongo, consisting of all persons, believing they descend from the same ancestor. In present times, the Tsonga community structure is based on tribal relationships.

A tribe is a group of people which recognises the authority from one tribal chief or hosi, and is living in a specific tribal area, or tiko ra hosi  According to the Tsonga, there exists a strong relationship between the Creation (ntumbuloko) and a supernatural power called Tilo. Tilo refers to a vaguely described superior being, who created mankind, but it also refers to the heavens, being the home of this creature.

Visit this remarkalbe living museum, one of the top local attractions, situated in the Hans Merensky Nature Reserve, take the R71 leading towards Letsitele, and follow the R529 toward the Eiland Spa.